Shout out to Frankenstein for giving me the opportunity to interview him. In the 90s i was a fan of the hiphop that was coming out of Canada. Frankenstein was and still is one of the illest Mc's,Producer, Remixer out of Toronto.He has released nothing but classics on his label Knowledge of Self since the early 90s. From his Heavy beats to to his smooth flows ,He has definitely showed that he is one of the Heavy hitters outa the T-Dot. It's good to see that he's back and cooking up new treats from the dungeon. 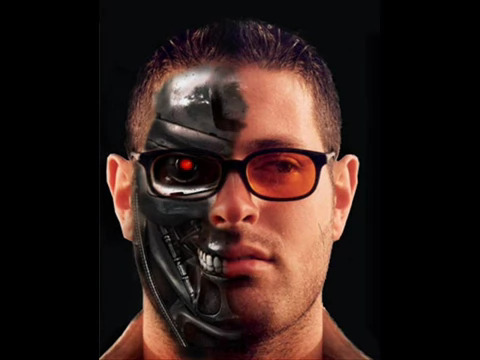 Cratez:Coming up  Who where your influences in Hip Hop?Mc's and producers

Frank:- I call it the Hip Hop Triangle, I always wanted my sound to have the Soul of Pete Rock, the boom bap of DJ Premier, and the moodiness of RZA.  At the base of the triangle for me was Marley Marl. The work Marley did with Rakim, Kane, Juice Crew, and on and on, in one way or another shaped me.  On the MC side I was always a big fan of Rakim, Kane, Nas & Biggie but if I had to pick who influenced me the most it would have to be Prodigy of Mobb Deep.  Still if I had to go deeper James Brown, the JB's along with the whole soul/jazz movement of the 60/70's  were responsible for making hip hop sound so good that it was impossible not to be a fan of those early sample based records.

Cratez:When did you first started rhyming and making beats?

Frank:- I got my first drum machine in 1988  a roland R5– and I was rhyming since 1986.  It's interesting in that most producers start out as DJ's.  I was an MC long before getting behind the boards.

Cratez: Could you say that Dream Warriors and Maestro Fresh Wes paved the way for Hip Hop in Canada?

Frank:- It's hard to argue any different.  The Dream Warriors & Maestro I have always had a great deal of respect for.  Namely because looking back they had their own sound they weren't chasing West Coast or East Coast.  Being some of the first pioneers coming out requires a certain level of paying homage.

Frank: There was a certain level of sincerity to it.  Back then the artists you named and who I know personally along with the Canadian seen as a whole were magical.  A level of authenticity that is hard to replicate today.  Saukrates in particular I feel is the best MC/producer Canada ever produced.


Cratez: In 1994 you released the 12 inch " Peace and quiet" under the name Delphi Oracle. Then in 1995 under Frankenstein. What made you change your name?

Frank: The Delphi Oracle was a group that consisted of AZ  a long time school friend and myself.  At that time AZ lost his sister to murder.  It caused a big shift in him and hip hop took  a side seat.  The name Delphi along with the label Knowledge of Self was always meant to provoke inner reflection and thought.  When I went on my own I thought about what hip hop was it began to draw parallels to the story of Frankenstein.  That is taking lifeless forgotten pieces putting them back together and creating new life.  In short all beat makers are Frankenstein, when the visit old dusty record shops and take bits and pieces from different records re-assemble them and create new life, a new sound out them.  That’s Frankenstein… 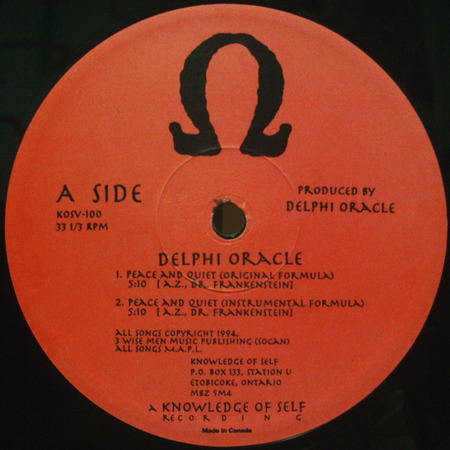 Cratez: In 1994 you had a LP that was supposed to come out called " Studio Sessions- Worx in Progress". Did that ever come out? and what was the project about?

Frank: I find this interesting.  I noticed this on You Tube and I can say no such project ever existed.  The truth is I had many beat tapes circulating and a few individuals took it upon themselves to release them on line and put a fabricated name to it.  I was sore at this as many of those beats I had song ideas for and to have them released before they were completed is like taking a dish out of the oven too early.  They spoiled what they could have became.  Imagine for a moment if someone had released Pete Rock's Reminisce Over You beat before CL and Pete were able to make history with it.   It's the world we live in, there is always someone ready to spoil the music, I can't understand why, namely because of have a ton of beat tapes from well known producers that I would never imagine doing that with…


Cratez:In the 1990s ( i forgot what year) the source magazine did an article on hiphop artists from Canada including your self. What was that exposure like for you ?

Frank:In all honesty I was grateful for being included but it truthfully had very little impact professionally for me.

Cratez:Besides your Rhyming and beats you are one of the illest remixers out there in my book. How did you come about making the live from New york remix records?

Frank: The live from New York Remixes was how I practised my craft.  I would often pull out accapellas and throw them over a beat I was working on and see how it would fit.  I had a collection of tracks and a few cats in my inner circle were like, "hey the world should hear this"  I was split 50/50 on doing it as they were not officially remixes and the fact that we gave out just about every unit we pressed helped me with the decision.  It was more like a production reel on vinyl for people to hear the spectrum of sound I could deliver.


Cratez:In 2000 you released a single called " The projects". sick track and ill cover. The cover resembles Nas's Illmatic Album cover. Tell me about that record.

Frank: I was flown out to Paris to record a track for JR Ewing and his people.  Great respect to the entire seen in France they showed me how serious they take hip hop.  I recorded the track and they needed a B side so when I got back to Toronto I did a Remix to it.  I gave JR Ewing and his people full creative control on the Cover and title of the song.  I personally have never lived in the projects and the song for me was more to pay homage to the fact that projects all over the world are responsible for a great deal of creativity and Hip Hop is one of the finest things to ever come from the streets…


Cratez:The "Rain is gone"single you did is such a deep song.Was that a personal track for you?

Frank: Indeed very personal.  I think we can all relate to when we are close to someone and in certain moments you feel things could never change between us.  The song was written to capture how often there's a pivotal shift in a relationship that can never be corrected, while we let it go and overcome,  some cuts are deep enough that stay with us forever, hence the rain is gone but no matter how you flip it what you did was still wrong.

Cratez:Let me tell you i rocked that UV ep to death back in the day. and still do. That EP felt like you put alot of heart and soul into it.From the production to your lyrics. Tell me about that EP and was it a warm up to your unreleased album "Agony and Ecstacy"? 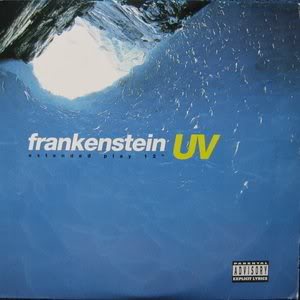 Frank:UV was precisely as you stated, heart and soul and the lead up to the album.  I sat often assembling what was to be the Agony & Ecstasy.  The thing about tracks I create is they need to inspire a feeling, they need to create emotion, or make you think,  and sometimes they just need to make your head nod.  I think UV captured that.


Cratez:Will you ever release "Agony and Ecstacy" ?

Frank:Yes I'm at the point that I feel it would make sense for heads to have what I spent so much time creating…


Cratez:What does the future hold for Frankenstein in hiphop?

Frank: I think I will continue to put out material that is consistent with the frankenstein sound-  still from the dungeon pumping that SP 1200.  Real headz will always find one another and this interview is a testament to that.
Posted by cratescienz at 11:35 PM