Interview with one of the Ozones finest Shinobi Stalin. 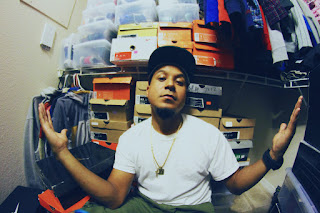 
Shinobi-I was Born in the Bronx but raised in Orlando

Cratez-who were your influences musically coming up?

Cratez- Whats the meaning behind the name Shinobi stalin?


Shinobi-So I was a sega kid growing up given the fact my parents could only afford to get me one system.  Shinobi 3 was one of my favorite games.  He's a ninja who wears white (which totally defeats the purpose in "Ninjaing") and throws Shurikens which explode enemies on impact.  I took it as a metaphor of myself using my lines to ignite the minds of others. The Stalin came later.  My homie Jason and myself used to make beats and play a game called Medal of Honor "Allied Assult" on the computer.  We are big history buffs and at the time really into the WW2. Reading up on Joseph Stalin I found out if he had a enemy he would basically erase them from history. They would disappear physically then their images would be blacked out where ever there was a public photo.  That ruthlessness is what I wanted people to think of my writing. Not very PC but fuck it lolol.

Cratez-when did you start mc'ing and when did you realize you wanted to take it seriously?


Shinobi-I started at around 12 and I realized when I wanted to do it seriously when I saw how happy making music made me. This was around 14 .

Cratez-"My Life in Life" is Such a dope track. Lets take it back to 2008.was zombie skool your first offical release? Bangin tracks on that Album.Tell me about the album and the cover. The SG1ft. the vets of kin is another banger btw. Shout out to Mygrane.

Shinobi-Thank you so much. Yall check out Zombie Skool! "My Life in Life" is one of my favorites also. Salute to Reeplay always have some shit in the wings. Yes Zombie Skool was my first release.  The album concept came from my cousins Tone, Psychem, and myself. We would watch alot of zombie movies and came to the conclusion that the zombies were just 85 percent of the population which are dumb, def, and blind. After we got that together I set up the album like a school day. SG1 is the lunch time Cypher . Salute to all the Vets of Kin. (AmiAM, Mygrane, Murdoc, JBiz, Juan Pierre, WordChemist, Tone Blare, P!). I made that beat.  The Cover was done by DJ Stranger ( go check out his mixes they're dope https://soundcloud.com/dj-stranger77 ) that was the second draft. I told him I wanted to be above the zombies with a pharaoh and Tiano ( I'm Black and Puerto Rican) behind. He simplified it then Rexsposure took the picture when I got it. Peace to Conshus for putting the words together on the artwork.

Cratez- The "SMN "joint you did Thats a tribute to skateboarding?


Shinobi-Yeah I grew up skating. The beat was done by JuniAli ( He just Dropped a dope Mixtape hosted by Tony Touch that the crew is all on. Check for The Beat Ministry Vol 2). The reason I truly fell in love with Hip Hop was because I would hear the music in skate videos and at the skate park.

Cratez- Then in 2014 you dropped another album called Invisible man. Was the "welcome to the ozone" the first single off the album? and How did the callabo with Roc Marciano come about for "Granite"


Shinobi-Salute to Temper 3000 for Lacing both of those tracks . We have videos for both. The Roc Marciano collab came from myself just wanting to work with one of my favorite emcees.  I Just hit him up and he laced me with what I needed.


Cratez-you have done a few features with producers from over seas. Your latest feature with producer from switzerland Mardoch "Booth talk" is heavy track. How do these overseas callabos come about?

Shinobi-Honestly cats just reach out . If its dope I fuck with it.  Salute to Mardoch .  Thanks for the props . I'm always up for collabs with people in different places.

Cratez- To me there is alot of dope talent out of the OZONE.I lived out there for a few years and I seen and heard alot of dope artists. And alot of those artists collab with each other. I like that. Do you feel the same way about the ozone?

Shinobi-I know we as city have some really dope emcees and artist out here. I believe that we can take any city in any capacity you can think of musically.  I do know they're some cats out here that need to step their bars up tho lol. Ozone is home I always rep my city I love it here.

Cratez- Now you got your latest release "Scumbag Jazz" with Marz Mello.Tell me about that project, the collabo, and what influenced you to create that album.

Shinobi-So Scumbag Jazz is the first official release from our Beer Money UNLTD Label. (You get it at all your favorite online retailers or physicals here https://www.undergroundhiphop.com/products/shinobi-stalin-and-marz-mello-scumbag-jazz-number-1-an-exercise-in-patience-cd ) Beer Money is WordChemist, DJ Stranger, Marz Mello, and myself. The project is a combination of joints I did for a Temper 3000 EP and newer joints Remixed and formatted by Marz Mello. Marz and Myself have been working together for years I hate his beats he hates my rhymes ... It's a match made in heaven lol.


Cratez- What motivates and inspires you to write a dope song?


Shinobi-I think motivation is BS. I write alot of my verses without the beat there. Having dope instrumental tho can definitely get you more exicted to write lol.  I let things flow naturally and don't really force topics.

Cratez- whats next for Shinobi Stalin? any shows? new projects?


Shinobi-Well First off if you haven't heard WordChemist's Binary EP please go find that. I know the Russians already bootlegged it lol. Also check out all the DJ Stranger "Touched by a Stranger" Mixes on soundcloud. Next on the plate is a Street Fighter 2 Tribute album by WordChemist and Myself. production by Sharp, Marz Mello, Temper 3000, Soy, Gatskan, King Karlo, and myself.  Its coming soon.  I'm in the starting phase of the next album. The usual suspects will be there. We also have Scumbag Beer Club a collab album between Marz Mello, WordChemist, and Myself coming next year. Please be on the lookout we are def dropping heat soon. Tell your friends Shinobi Stalin and Beer Money UNLTD are your new best buds lol.